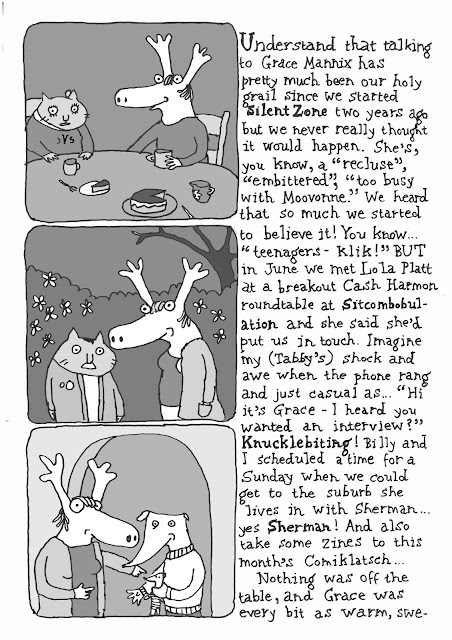 Putting the pictures in photoshop to add tone is troublesome because there's just not enough greys in the world. All I really want is differentiation between masses here and it's difficult to get any of it right, in a way that is consistent.
This morning I'm reading my DeGaris book out loud to the cats just as a final fix up (Sophie and I found that with the Dogs in Space book it made a lot of sense to read chapters out loud to each other - which was time-consuming but every page you realised you were ironing out kinks). The DeGaris book was very effectively subedited by a person unknown to me, and I was really pleased to see what they caught, but there are still bits and pieces that could be better expressed or which are outright wrong - all the things I shake my head about with students' work and which I am guilty of all the time, particularly sentence fragments.
I don't know how you proofread a graphic novel, I think you would have to do weird stuff like look at every depiction of a character from frame to frame to make sure their clothes are the same colour/shade and so on. I admit I really feel some smug pleasure in doing in-depth detail, for instance a well-packed bookshelf, which becomes a busy but samey background. I am very likely though to give it four shelves in one frame and three in another. My grasp on perspective is limited to knowing what looks wrong, but not how to do it right (vague memories come back about locating the reader's eye view of lines to a distant and usually hypothetical endpoint, but other problems present eg the issues surrounding making a whole page of 5-8 pictures visually satisfying as a whole - I guess that's a secondary issue but still nice if it can be done).
Posted by David Nichols at 10:36 AM