I really enjoyed being a member of Huon and I think we did great work. Apart from anything else we were so freakin' productive - five albums in three years it would appear according to Discogs although the sixth album more or less comes from that same early-21st-century continuity (it just didn't come out until much later, and I think there might have been a little bit of reworking of some of it at that later stage, can't really remember).

Mainly Huon was me, Mia, Andrew and Ellen,* with Mia and Andrew being more or less 50-50 in terms of the songwriting. We just powered through stuff so quickly, we played shambolic shows (naturally) which were nevertheless massively fun and we toured at least twice - once to Sydney and once to the USA (in October 2001 - very strange times). What more could you want out of a band?!

I have nothing too special to convey beyond that, just want to memorialise, we really had our moments. I still love some of those songs a lot. Mia's song 'Falling' for instance is one of her greatest works in a very impressive canon. She/we later redid this in another group iteration, I don't know which version I prefer, what they show combined is that it's a classic work.

So, I just cracked open the Huon box, as I do every couple of years, to marvel at productivity of twenty years ago: 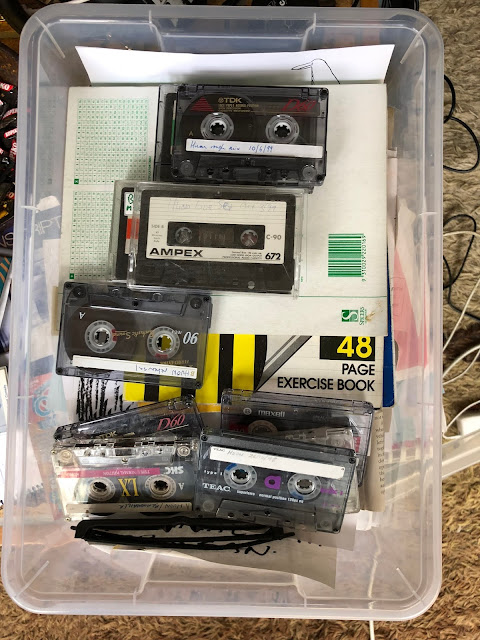 I wonder if I, or anyone, will ever listen to those tapes again (or ever listened to them at all). I think all up there were about 100 Huon songs, Andrew and I bashed a few out in the studio from woah to go in individual sessions, and some were arrived at more 'organically' as they say. I mean I think by the time of the last album (Advance, which we recorded in probably 2003 mainly) we basically recorded our live set, but stuff like Songs for Lord Tortoise was very studio, as was the disco 10" which we called Disco Square but that title wasn't perhaps totally obvious from the label.

There were probably at least another 10-15 songs that were never released, of course they were widely bootlegged lol. I seem to recall hatching a few additional (posthumous?) releases, like an expanded version of our first album Epic as Epicentre with a whole lot of instrumentals featuring Ian Wadley on - keyboards maybe? And an expanded version of Disco Square with an entire 'side 3' (the vinyl version was exactly 14 minutes a side for side 1 and 2, so side 3 was calculated the same). I guess by that stage though the overall excitement had dissipated.

* Many honourable mentions to others though, Greg Wadley, Julian Teakle, Bianca Brant, Pamela Valfer, Stewart Anderson, Jen Turrell, Bart Cummings, Nicole Thibault, Alison Bolger, gosh what a supergroup. And don't even start me on the uncleared samples.
Posted by David Nichols at 11:17 AM No comments: