more than half way through january for god's sake! 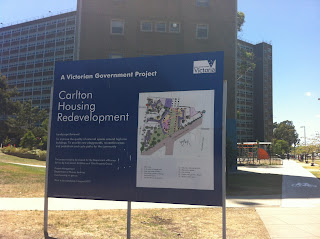 Statistics show this is the latest I have waited in a new year to blog, but statistics  also show that this is the year in my life when the least has happened in the first two weeks, so whatevs. I still have nothing to report. I will admit (as per the photograph above) I was on television news three times in one moment, two days ago talking about the Bailieu government's aspiration towards selling off a lot of land on public housing sites for private housing, a really bad plan that they think they can get away with and perhaps they will. Our neighbour up the road yelled out to me that I looked good on TV so I suppose my own performance might have been worse, unless she was being sarcastic. Of course she wasn't. She might have been being polite though.

Other news for the beginning of January: it has been hot, there's a surprise. I washed the dogs this morning, and unlike last time I did it a couple of months ago, Charlie was OK with it (I think because I did not give her a big buildup i.e. taking her collar off before she knew what it was about - she's suspicious and hates suspense) and Barry wasn't (who knows why). I have watched The Killing season 1 and 2. I am more ready to get back to work than I have been lately. It's working out. I'll have more to say anon. Laters gators.

Posted by David Nichols at 12:46 PM No comments: