Last night, or probably at about 5:07 this morning, I had a dream that I was trying to make friends with a millionaire dotcom youngster, a kind of Mark Zuckerberg character only more 80s, with a cap on backwards, the reason he was in my dream was surely that last night I was listening to On the Media and there was a portion of the program about Napster and Spotify. He was talking about a person I know who is a woman in indie rock who he claimed to have kissed. I expressed incredulity because she is in a long term relationship etc and he said 'you know, she can get all the attention she wants, just by wanting it' or something like that, and to my credit I was thinking, 'wow, I wanted to be this guy's friend because he's famous and rich, but actually he's kind of a boring dick.' Then I woke up because I had this absolutely shattering cramp in my leg which was just excruciating. And then I got up. It was 5:08 am.
Posted by David Nichols at 4:55 PM No comments:

I guess it will be like this for another week or so: Barry wakes up at 6, needs to go 'to the toilet' (you know he doesn't really go to any toilet) and then he doesn't want to be alone! So here I am scrolling through meaningless/irrelevant celebrity news items, facebook, emails etc etc while a dog goes deeply to sleep. The cats are also peculiar in their behaviour and synched into this 6 am thing, and Asha in particular misses the morning routines which I must admit I also really like with her in the warmer months, when the dog(s) remain(s) outside in the morning. It'll be like this for another week because Ferdinand is coming next weekend. Then, the only side of clingy Barry I will see is the old jealous Barry, who I'm fairly used to. I think Barry will be happier overall - he loves dogs - so that's what matters but I do like his attentiveness at the moment.

In other news. Saw Todd Rundgren twice last weekend, my 2nd and 3rd shows for the year. Bought a copy of TR's new album State on Amazon afew weeks ago and it finally arrived - I've only played side one so far (yes, I bought the double vinyl - I don't know why, I just did) and am particularly keen on a song called 'Ping Me'. I think it's the combination of a kind of silly Chris Montezesque lyric with solid hystrionic backing. Can't wait to play the other three sides.

Have now watched 2 1/2 episodes of season one of Game of Thrones. Still don't get it. Perhaps there will never be a moment when I go 'I can't wait to see what happens when...' (I'd pad that hypothetical out but I can't remember any of the characters' names). I mean it was necessary to start with the first season but it is of course the season based on the first book which I read a couple of years ago and found extremely uncompelling.

Anyway it's time to have breakfast, listen to the News Quiz and maybe try and sneak off back to bed, as Barry is now snoring. See you later.
Posted by David Nichols at 7:17 AM 2 comments: 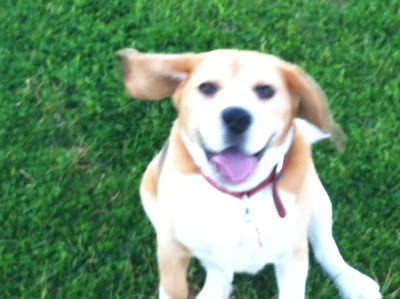 *If you anthropomorphise him, he looks quite happy here but actually he's just an animal who's been running and has his mouth open.

Barry is reassessing his situation and finding it not entirely to his liking. It is hardly surprising. Charlie and he did not often see eye to eye (she was generally a bit of a curmudgeon - even when young - and he was always too juvenile with very different lifestyle interests to hers) but they were always together, probably about 23.5 hours out of every 24, for all but the first couple of months of his three year existence. She was never really a parent figure but she was pack leader (that situation was renegotiated somewhat in the last few weeks of her life) and he respected that, more or less, despite being much, much bigger than her.

So, he is getting used to her not being here, but he doesn't like it and while it would be going too far to say it's like losing a limb - because he has all the limbs he needs - it's certainly losing something. Yesterday morning, for instance, he was all about going out the back - coming in - going out and each time it was as though he was expecting to see Charlie there, which would of course be the normal circumstance. Now, there's no-one for him except his people (he has also shown a much greater interest in the cats, which is strange). Yesterday morning I took him up to the park for a brief walk and we ran into Joan and her ancient Chock, who Charlie always used to bark at so Barry has never really spent time with. He and Barry had a kind of silent commune, most of which was Barry sniffing Chock's arse (Joan said he'd just had his anal glands 'done'  and demonstrated to me the size of one of them and said she'd never seen anything like it). Ah, the world of dogs. The spectrum of fascinating can so quickly go into the realm of disgusting. 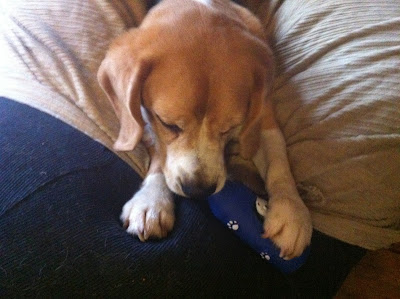 23 July update: He seems to be adjusting better, and perhaps to some degree enjoying his solo status - I hope he doesn't enjoy it too much as Ferdinand will be here in ten days and then change will be absolute. The challenge then will be to stop Barry feeling on the outer (I think to say he was jealous when Charlie got attention is too much projection; more likely, he was thinking, 'attention is on offer, I need to get some of that action'. Or who knows. But I don't know that he really enjoys his walks as much when it's just him alone; Charlie and Barry had a special walking system, of drawing each other's attention to interesting smells, activities etc and they could be a very effective pair of satellites to the walking human, whereas Barry has to just pay attention to the walking human who he probably finds a little dull.
Posted by David Nichols at 6:33 AM No comments:

She was a funny dog a lot of the time

See here and here for instance

She certainly did not back away from conflict (particularly when she could choose the battle):
See here and here.

She also knew how to relax when she wanted to

Excursions four years ago which we enjoyed here and here (there's at least one other in the series I can't find at the moment).

Anyway I was going to go through past posts and pick out some good ones but right now they are making me sad and also there is so much writing about Charlie in there I am just amazed at how much she has been documented.

Long time readers will by now have become familiar with my header pic of Millie and Charlie looking into the sunset on a walk in Meadow Heights. I have replaced it with what is probably my favourite picture of Charlie - taken only a few weeks ago. She was completely in her element. I have to admit the picture makes me feel terrible and I'm not even sure if I can leave it there.

Posted by David Nichols at 10:12 AM No comments:

Charlie's condition was so awful by late last night there was no option but to have her euthanased. The cancer appeared to have spread to her liver, she was panting, would not eat and was in great distress. As with most of the beagles in my life, I do know she had an amazingly good life. One thing she particularly enjoyed was climbing inside the beanbag cover and then coming out of it. 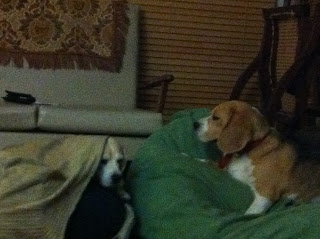 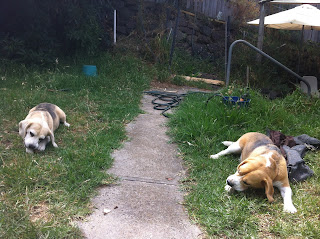 Additionally, she loved the park. 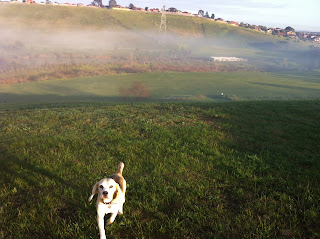 The last few nights (but seemingly not last night - I haven't thoroughly checked) Charlie has vomited in the wee hours. For a few days we thought she was defecating (I nearly wrote shitting but that is too uncouth) in the night, in the beanbag in which she sleeps, but Mia saw her vomit last night and saw what it looked like - pale and caked. I guess Charlie has enough digestion to wring the moisture from the food but not enough to get it going all the way through (though something goes through, as she does still shit). It's not a pleasant way to be. Although she is still happy to go for walks, wants affection, and so on, she is also demonstrating some subtly new behaviours (last night she left the house to go and sit with Mia in the studio, this morning she wanted to go and lie in her bed outside - these are nonconforming behaviours, they don't mean much I suppose in themselves, but they're out of character). It is a very sad situation for us and for Charlie who has only ever wanted a few things out of life (one of which is, admittedly, supreme power over all). But she is a loyal and endearing personality and I did hope she'd have a long dotage. 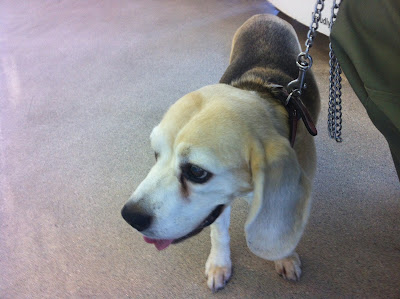 Posted by David Nichols at 7:16 AM No comments: 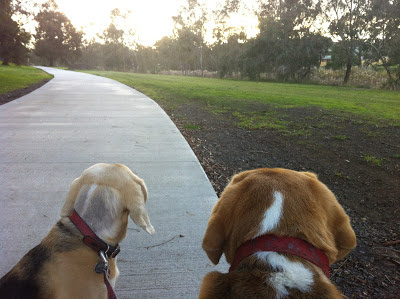 Posted by David Nichols at 10:41 AM No comments:

Charlie is not getting better, which is of course no surprise, as she was never expected to. Over the last week her guts have started giving her trouble again, cortisone or no cortisone (or perhaps because of cortisone, who knows). She seems particularly troubled in the evening, when she's had her dinner, and this is when she gets diaorrhea (I can never spell that) and her digestion is very loud indeed, she also has trouble getting comfortable. In the morning I think she feels a little better and her usual self. No way of knowing how much longer she will last, which is very sad, but it's consolation to me at least that she has no idea. 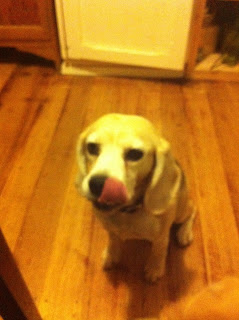 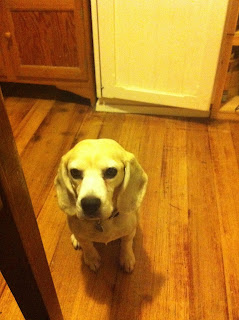