the penguin book of comics 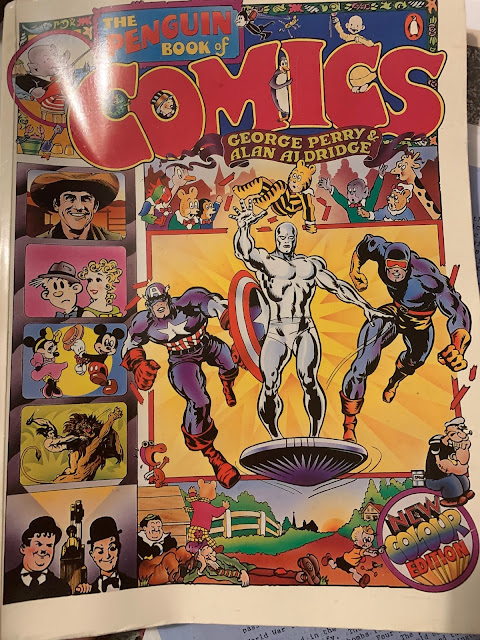 So the Krazy book I read a while ago got me thinking about what Krazy Kat meant to me as a young child, when I was reading the copy of the Penguin Book of Comics my father bought for me at age 7 or 8. As we all know, being a grown up means you can spend your hard earned fossicking through the planet's junk for replicas of that which you knew at a younger age, so, I bought another copy of the book online (though in truth my original copy is probably still around somewhere - I certainly wouldn't have thrown it away).

The original book came out in 1968. This is a 1999 reprint with a new introduction by George Perry, who by the way I discovered died earlier this year. Perry was a very productive author, writing primarily (it would seem) on film, and working for a lot of his adult life at the London Sunday Times. This book - according to Perry's intro - was a late outcome of the brief florid period when Alan Aldridge, as a young and exciting graphic artist, was brought in to spruce up Penguin Books generally - he didn't last long (1965-67?) and I think this book came out after he'd left the company - at least - Perry's introduction suggests that it came out primarily because it was too far gone to be withdrawn, but it emerged to be published by a company that probably regretted commissioning it.

This morning I had a look at some newspaper reviews of the book from the late 60s, and I note that plus ça change, all reviewers really want to do is (1) regard it as a kind of catalogue of memories and amusements, rather than any kind of phenomenon in its own right (2) talk about what's not in it, rather than what is. It was reviewed extensively in the US and, assuming all editions were the same, I cannot imagine what the Americans made of all the British comic material in there...or the weird, weird (yes, it's still weird) fact of British comics like Film Fun which featured Hollywood stars as though they were ordinary British idiots (notwithstanding that quite a few famous Hollywood comics - Stan Laurel, Charlie Chaplin, Bob Hope spring to mind - were actually British. But that doesn't mean they were ever working class fish supper fools the way they were represented in these comics.)

Being self-obsessed I wanted to look at this book again and see if there was anything that had particular significance for me as a child, were I can examine the impact on my emerging brain. But not really, actually. That said, every page was familiar, and I'm sure I pored over the whole (including the text). This scenario from a Ben Turpin and Charlie Lynn story in Film Fun 24 April 1920 (p. 77 of the book) really resonated for me as a child. Ben and Charlie lure some 'hearty roysterers' who had popped their balloons (sigh - it's a long story) into a tent they've previously painted a face on, and then tie a rope around their collective wastes and make pots of money entertaining other roysterers ('And didn't the populace pop up!' says the caption, 'Well, just look at the art engraving!'). 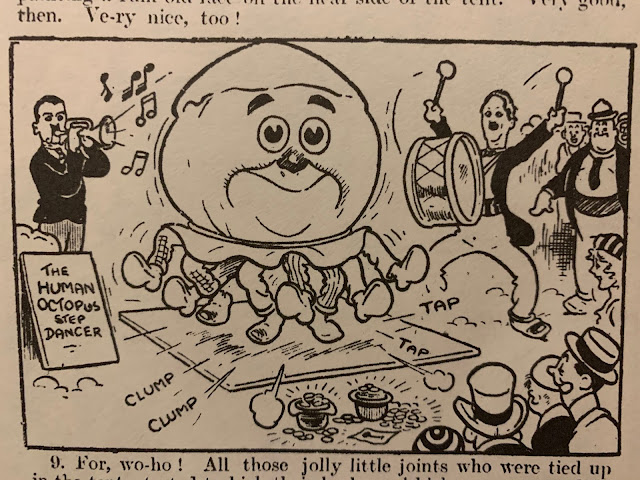 One thing that is perhaps curious, and I suppose a little disappointing, about the book is the poor quality of some of the imagery. Surely, this is a book for browsing, yet a lot of the text and images are less legible surely than they could be. That said, the colour section is pretty sumptuous. Towards the end of the book there are illustrations that show where comic art and modern/real art interrelate or blend; I had not thought about this bizarre work for a long time, although like everything I suppose when I was 7 or 8 I took it in my stride: 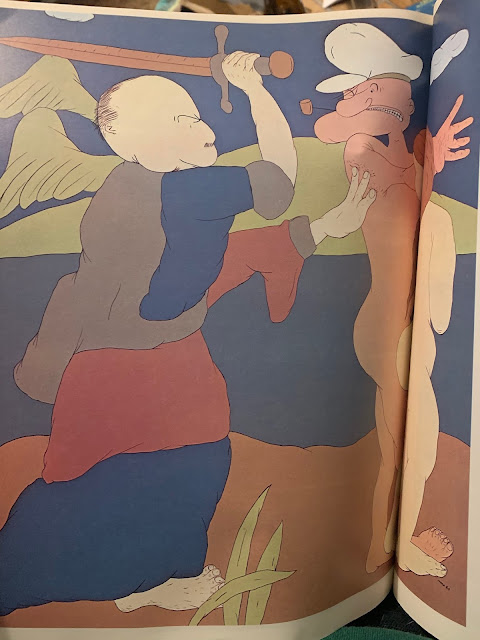 What shocks me now is to discover from reading the caption that this is actually the work of Phillipe Mora, described herein as 'a young artist and filmmaker born in Paris in 1949 and educated in Australia' (p. 237). I didn't know Mora painted, let alone that he'd made this contribution to the shaping of my psyche. Speaking of which: 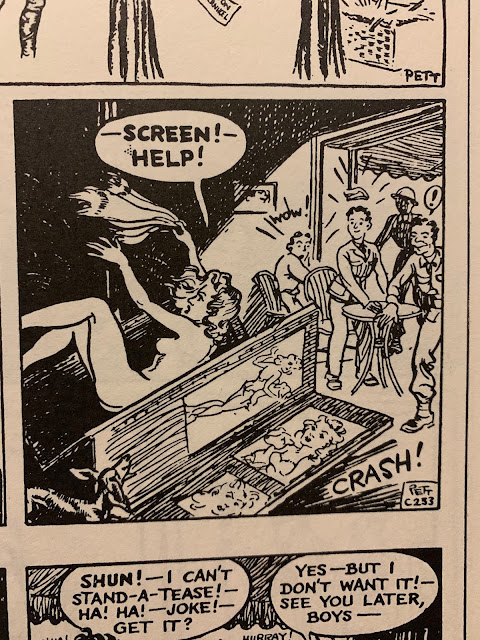 There's quite a bit of bawdy material in the book as well, and I do recall regarding this storyline - in which Jane for no good reason (except who needs a reason) is bathing behind a screen in a cafe and then reveals herself to all the soldiers when she knocks over the screen. See you later boys indeed. I had to go to wikipedia to find whether this strip was actually in a mainstream newspaper (it was) and perhaps that's a failing of Perry/Aldridge's text - they seem to assume a lot of knowledge on the part of their readers.

OK, I'm going to keep dipping in. Even just flipping through the book then, I found a lot more things to think about.
Posted by David Nichols at 9:42 PM