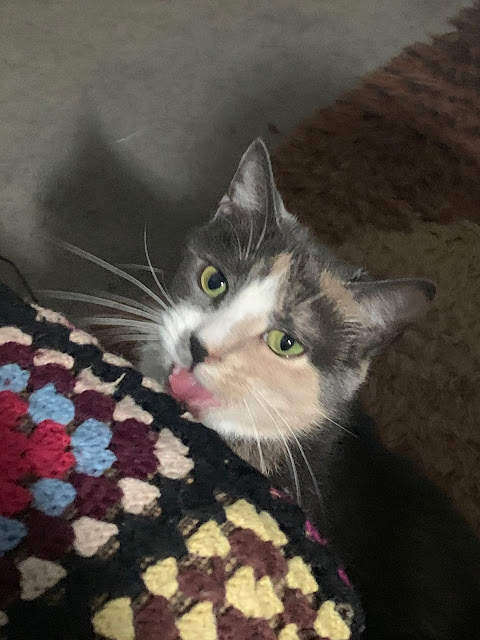 I have never known a cat to be as dog like as Helmi is in this regard: she runs a commentary on the outside world, at least insofar as what she does not like. Last night there was quite a wild storm going on outside, and Helmi took the opportunity to growl up a storm of her own.
I have noticed this in Nancy to the extent that she will sometimes get a scare if there is something coming from outside that perturbs her (people in the street, etc) but Helmi is less panicking about attack and more like - under her breath - 'fuck you, you fucking fuck'.
I'd respect it more if I thought it wasn't needless bravado, since she is really just a small, frightened cat who can't shit in her litter tray properly, but I guess she only knows what she knows about the world - not much.
She also miaows a lot because she wants something but what on earth could it be? Unknowable, possibly even to her.
Incidentally, slight thaw between her and Nancy - slight.

*21/5 update: this evening I was making the bed, and had stripped it but had only put the top sheet on the bed without actually fitting it. The people next door had visitors and they were talking on the stairs as the visitors were leaving. Helmi - who I now appreciate has not seen or heard any person except me for about two months now - hated it, and was growling very deeply, then disappeared. I found her bundled up in the fitted sheet. So I guess - she's terrified of other people, and things generally, and so that's why she hides all day. That doesn't explain why she comes out at night.
Posted by David Nichols at 10:15 AM