OK sorry today's walk didn't really cover any new ground at all, though I think it's new to you because I didn't detail it previously - it was probably last Saturday or something that I did it - stumbled on a K-Market (big, bald, blank shopping mall) at Turtolua. I really don't have much to say about that; it's a half-empty bargain warehouse with nothing special in it (though I did buy a bath towel - the towel at the air bnb is nasty and scratchy) and a colossal supermarket, ie the KMarket. Actually the real reason I went anywhere today was to do my washing, which in truth I didn't really have to do till tomorrow, but screw it, I decided I'd do it today. You know.

I know how much you like TMI so I'll tell you, my phone's been weird for weeks and every time I hook it up to my computer, it has been saying it's got 300 photos on it, but most of them are things I'd previously deleted. Today I plugged in the phone to upload today's photos and they weren't there. So I finally downloaded the 300 photos, because I knew they had to be in there somewhere, and they were, but there was a lot of messing around to get them, so these are out of order and rather than spend the time putting them in order I'm just going to take the attitude that potentially that makes the whole thing more interesting. So...

Here's the laundromat. There aren't many in Finland apparently so they're gold if you get one. This is a chain and very fancy it is too. You don't need to put soap in which is pretty amazing. Anyway the main reason I took this photograph was to illustrate some point about the Finns' obsession with their rugs. This machine has a rug in it. I'm pretty sure you're not supposed to do that. 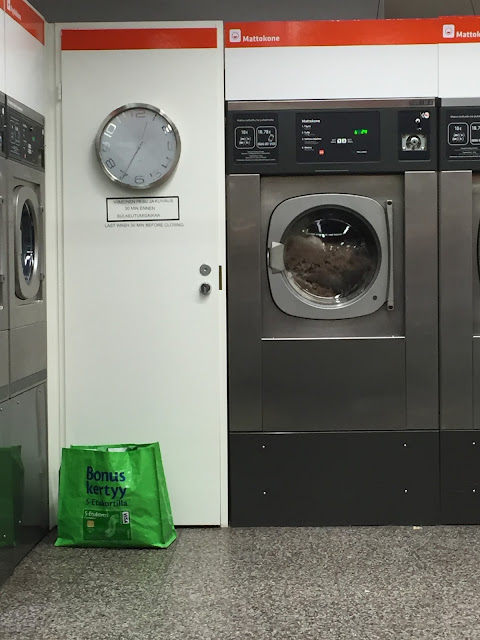 Here's that building I mentioned yesterday. Big deal, right? I'm a bit intrigued. I just don't know how to find out what these things are. I think whatever this used to be, it's now an electricity substation, but it's older than electricity, I think. 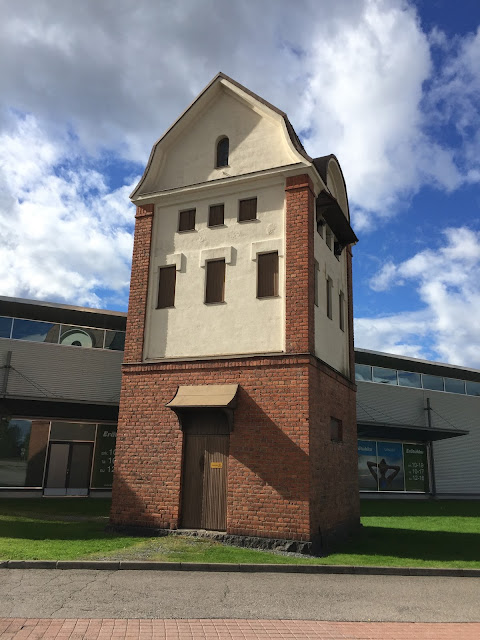 While my washing was drying I sat on this little hill and ate cherry tomatoes, a mushroom and a fig. 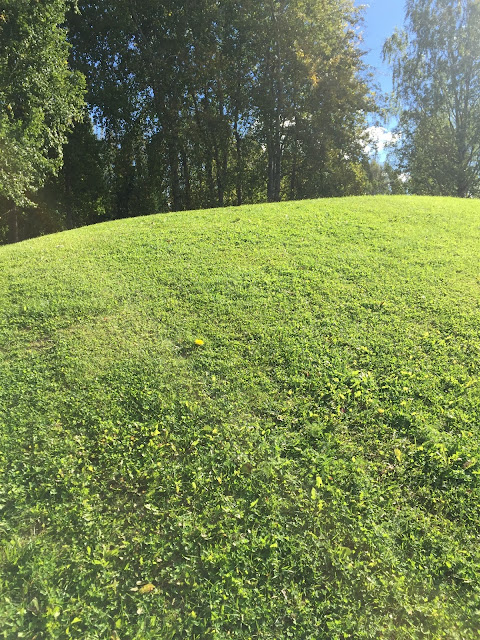 OK remember what I said about rugs? This is like a rug beating facility. They are obsessed with their freaking rugs, and they need all this rug infrastructure for correct rug management. I came across this on the shore of the lake, where I was expecting in my silly anglo way to find just a nice shoreline path to get me to where I was going in a scenic take your time way. No. Rugs take priority. 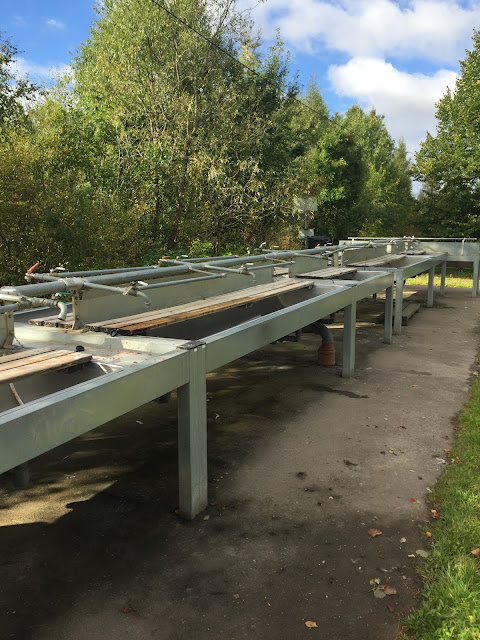 Rug washing line. I could have just taken this rug and probably caused a national crisis. 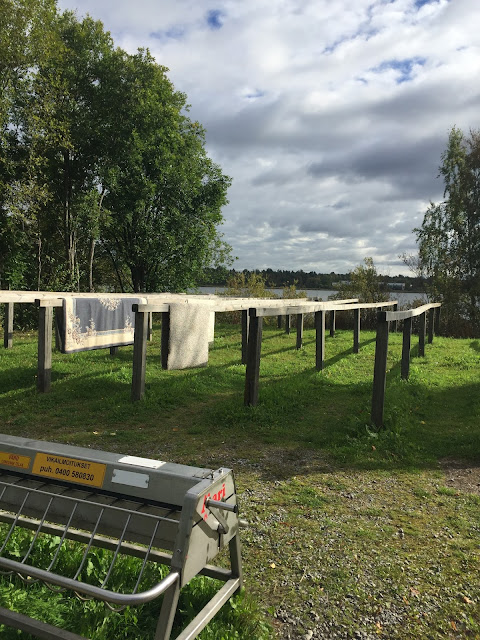 These enormous praying mantises were also interested in the rugs. 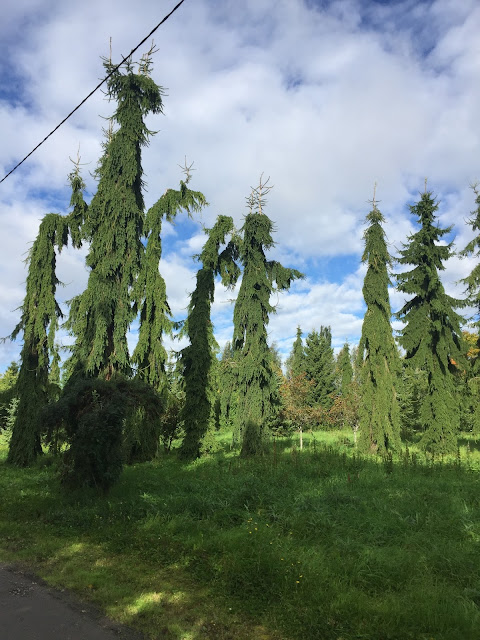 Almost at the shopping centre. 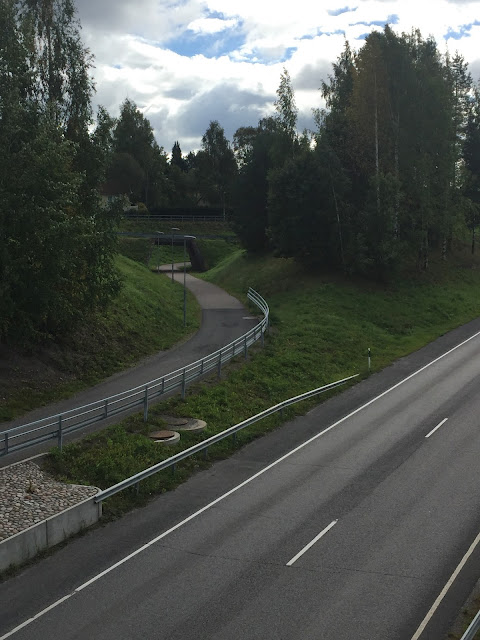 Apparently the Finns don't realise they're exotic. They think putting some English shit on your wall is exotic. Imagine. This is like the worst thing I have ever seen, and I've seen people beheaded. 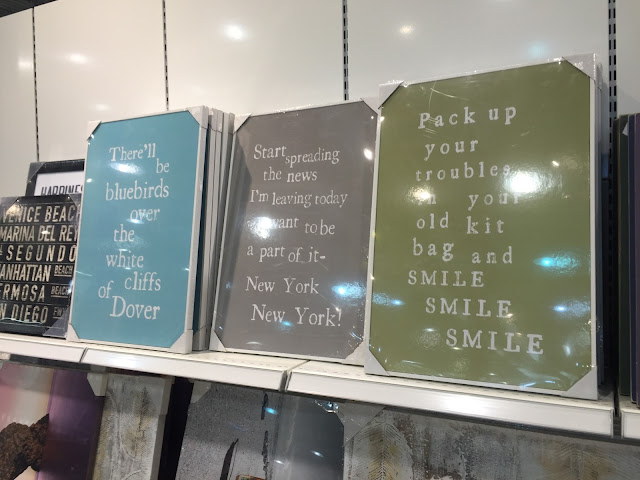 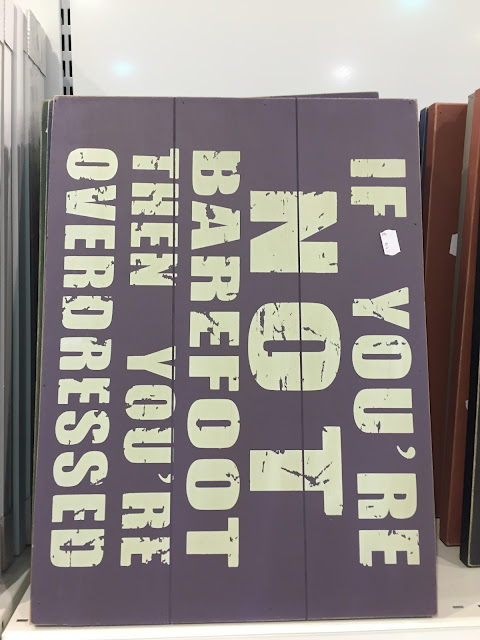 OK so like opposite the K-Market is a bunch of buildings that look like farm buildings and surely once were. There's a little nursery and that's what I think this giant strawberry pertains to but I'm not entirely sure. I'm from Australia I have to photograph any overscale model or representation of anything. 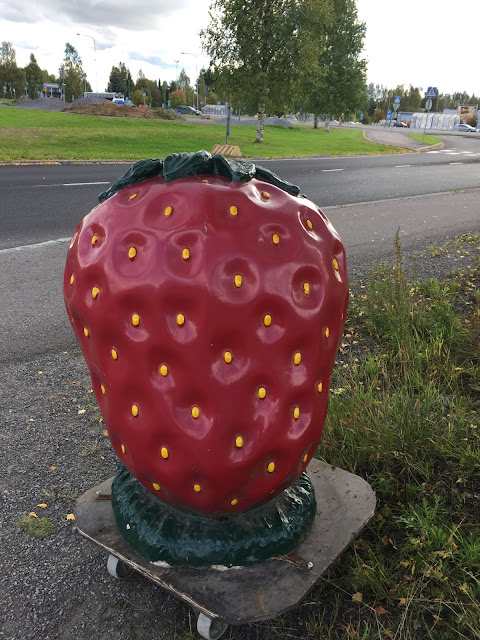 So that's about it. Sorry not much happened today out and about I have mainly been working. I did unlock a lot of pictures though with that phone disgorgement and I may take a little walk down memory lane, rather than Nekalantie, shortly.
Posted by David Nichols at 3:50 AM