at least you can say you've seen it 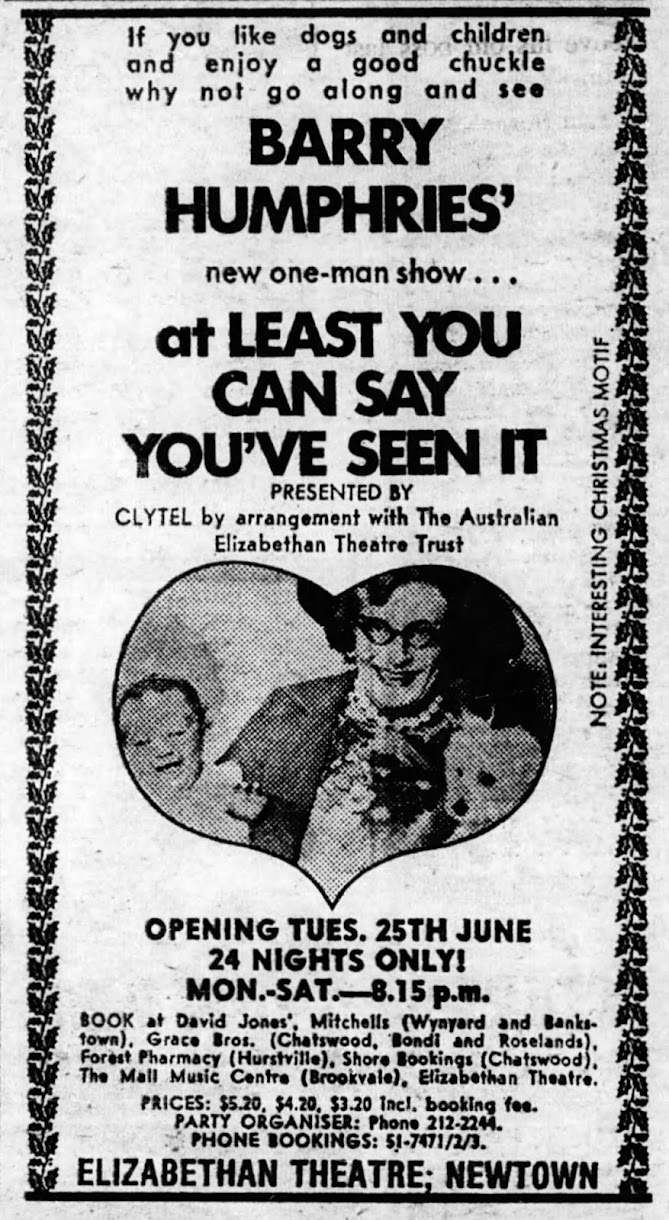 I actually did not see this show. I have seen Barry Humphries live at least once though, possibly twice, but in the 90s, not June 1974.
'The other week, in the Spectator, Mr Harold Nicolson was consoling himself as best he could for having reached the age of sixty. As he perceived, the only positive satisfaction in growing older is that after a certain point you can begin boasting of having seen things that no one will ever have the chance to see again.' So wrote George Orwell in a column published in the Tribune on 24 January 1947. He goes on to talk about some celebrities he saw in his life: Marie Lloyd, Little Tich, and 'a string of crowned heads and other celebrities from Edward VII onwards'. He then focuses on two important moments: seeing Pétain at Foch's funeral in 1929 and a decade before Queen Mary at Windsor Castle, although at that time he says he was more entranced by one of her grooms, a 'strange archaic figure... immobile as a waxwork.'*
I have to put aside the weirdness I feel at someone consoling themselves at reaching 60 as though it were some kind of grand old seniority, although since the way stats are headed in Victoria it seems likely I will die from coronavirus sometime next week, I guess I will never really know what 60 feels like. But of course like almost anyone who's read that column or reprints of it in the last 73 years, I have been moved to wonder about the things I've seen, that no-one will ever have the chance to see again. Like Orwell, I initially think less of things and more of people, that is, people who in many instances stayed alive long enough for me to have seen them living, and I feel like I have quite a few strings to my bow there, although I also am reminded of the show title At Least You Can Say You've Seen It, a Barry Humphries joke that I still think is funny every time I think of it.
OK, so if existing in the same place/time as someone is valuable or important, which it isn't, except if a bomb hit that place and time everyone would remember the famous person dying and occasionally there'd be a completist list somewhere of the other people who died and my name would be on it, I have:
Met Ernie Bourne at a party or some kind of social function where I was too young to distinguish fact from fiction
Seen Uncle Norman and Joffa Boy
Had a coin taken out of my ear by Norman Hunter
Shaken hands with Roald Dahl
Seen the Aunty Jack show at Dallas Brookes Hall
Shaken hands with Daryl Somers
Saw Prince Charles at Robert Menzies' funeral procession down Collins St, 1978
Those are pretty good, aren't they, although really all except Uncle Norman and Joffa Boy were currently active and famous when I saw them. Then in adult life, I've:
Seen Snakefinger's legendary show the night he had his heart attack. 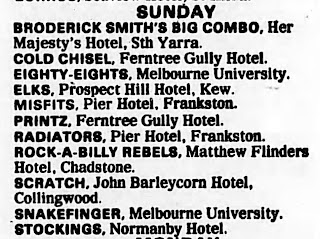 Look at all the man bands, May 1981. I don't regret my choice.
Seen The Human League (three times, but most importantly the legendarily terrible 1983 era when they were barely knew their own songs, let alone how to play them); The Birthday Party; The Gun Club; New Order in their legendarily terrible etc etc see above description of the Human League; Camper Van Beethoven; Beat Happening; The Smiths; The Fall four or five times between 1982-1990 and of course met and spoke with Mark E Smith in 1982 and had a brief correspondence with him; Jesus and Mary Chain, apparently, though I don't remember that at all (I reviewed it for a British music magazine, and I'd remember if I faked it). I saw PiL after they started to go downhill (1986 maybe?). I saw, you know, Australian Crawl. Obviously I was an active participant in the 'scene' including the Go-Betweens, Triffids, Laughing Clowns, three groups I see as so radically distinct from each other I can barely put them in one sentence but time-wise it's doable. This list devolves into people I met when I worked for Smash Hits so it starts to get meaningless - I've 'met' Kylie Minogue, twice, but that's day job stuff that means little, ditto the weirdness of being part of a 'group interview' with Mel Gibson in, of all places, a hotel in Albury. To be honest, and sorry George, most of the above doesn't mean that much to me but as mentioned, I was participating in the culture, not observing relics. On the other hand I'd much rather have seen Little Tich, d. 1928.
I have also had an argument with Barry Humphries about the rarity value of one of his early LPs (at a book signing), and I have held momentary eye contact with Germane Greer, I don't know why that happened, perhaps more excitingly it was at the Russell Cinemas, now sadly gone but very important in my memory. I did see Gough Whitlam, launching one of his late period books at the Atheneum, and come to think of it he's probably the only PM I've seen in person, unless you count Robert Menzies in his coffin (where he belongs). Relatedly, though, I once saw Nico stuffing corn chips in her mouth in the foyer of the Bondi Cosmopolitan.
I think this post has to be an active repository. Things will come to me that qualify as 'things that no one will ever have the chance to see again'. Here's one that just occurred to me: people smoking in restaurants, cinemas and on aeroplanes. I don't think I'll see that again. But in the main such things are probably less likely to be people (even people now dead) and more likely to be places, but at present I can only think of the three houses I grew up in, all long since demolished. Oh, I have been on a Ballarat tram, so that means before 1971: my father took me to Ballarat specially to travel on one, as they were weeks away from being decommissioned. I think we went around Lake Wendouree, but that might be a false memory, but it's also fairly likely. 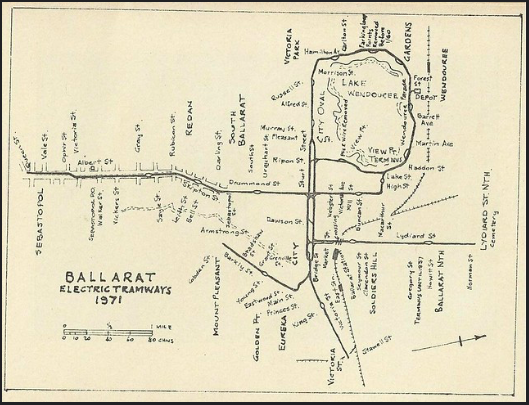 *George Orwell (ed. Ian Angus and Sonia Orwell) The Collected Essays, Journalism and Letters of George Orwell Volume 4: In Front of Your Nose Penguin, Harmondsworth, 1970 p. 317
Posted by David Nichols at 10:07 AM

Email ThisBlogThis!Share to TwitterShare to FacebookShare to Pinterest
Labels: at least you can say you've seen it

To add to your close encounters with PMs recollections I was delivering unsold theatre tickets to the Vic Arts Centre and I almost collided with Bob Hawke who was powering up the main foyer stairs, entourage in tow. He was much larger in person than I expected. I also went to a recital of Edith Sitwell's Façade read by Gough and Margaret Whitlam at the Melbourne Concert Hall. It was a lousy recital, not that it mattered.