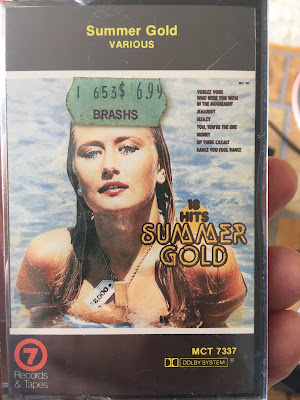 I've been really enjoying this 1979 Seven Records compilation recently and I've been researching some of the tracks/artists represented here. There are actually very few hits on the compilation, kicking off - surprisingly - with Abba's 'Voulez-Vous' which was not a hit in Australia, a fact that had eluded me I suppose because it's about as iconic as any other Abba single. I also note that, coincidentally, it's the only Abba studio recording made outside Sweden - it was recorded in Florida.

The fact that it wasn't a hit is unusual not just because Australians were generally uncritical consumers of Abba material, even years after the Best of Abba/Arrival peak, because of the fact that Abba had three other big hits in Australia in 1979: 'Chiquitita', 'Does Your Mother Know' and 'Gimme Gimme Gimme (A Man After Midnight)'. They were all top ten. While the first two are, arguably, more pop than 'Voulez-Vous,' 'Gimme Gimme Gimme' is basically Laibach by comparison and I don't think there's much of a case for 'Voulez-Vous' frightening Abba fans away (there might be a case for it softening the 'Gimme Gimme' blow).

In any case, this song kicks off the album in pretty fabulous fashion, although one does get the sense that here Abba are following a trend rather than doing anything sensationally original as is their typical wont. The strident nature of the vocal and the general 'tough' nature of the guitar line, etc suggests to me that the group were getting a bit sick of being described as sounding like Abba, when they could obviously sound like a bunch of hard-arse nonentities, too. Still. Cool song and a great way to kick off an album.

I also like the additional French lyric they included "La question c'est voulez-vouz?'. Sort of Lady Marmalade-lite. They also brought back the Knowing Me Knowing you 'aha's in a tougher disco-fied way.