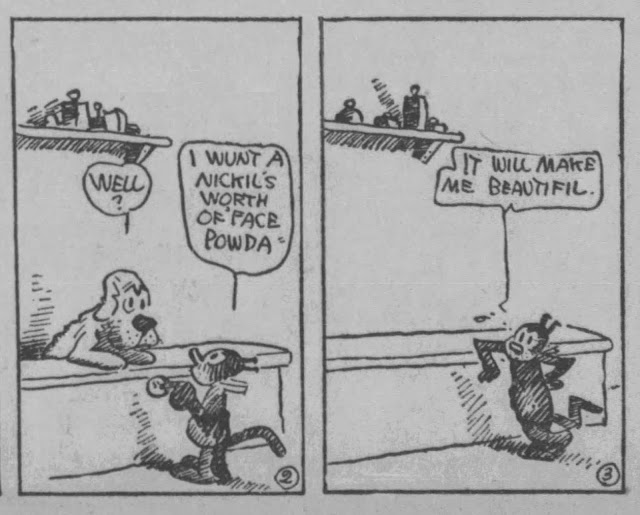 So it took me more than three weeks but I finally finished reading Michael Tisserand's biography of George Herriman which I mentioned last month. It is a very well-researched and comprehensive piece of work about a man who, strangely, created a magnificent oeuvre and was a genuinely brilliant artist but who seemed hellbent on being nothing more than genial and self-effacing. In that regard, Herriman is a disappointment because he made no particular grand gestures or outrageous statements; he seemed to firstly be nice to everyone and secondly, sadly, afflicted by a host of awful ailments. He died a widow and though young by our standards (mid-60s) quite debilitated in his last few years.

Tisserand sticks to the theme of Herriman's African-American background and continues to make a lot of it, which I think in the circumstances is valid. The Herrimans are absolutely wedded to the lie of his whiteness (they buy into a restricted housing area in Hollywood) and his work adheres to the racial tropes of the period he's working in (though Tisserand does find instances where he is able - largely through use of whimsical funny animals - to veer away from convention).

In short, I will say, you could not ask for a better and more thoughtful biography of a major artistic figure of the early 20th century. I guess the problem is that, while Herriman's impact was huge and indeed continues (Tisserand even gets into the muddy waters of whether Mickey Mouse is an outcome of Krazy Kat - seems probable - but is that something to congratulate anyone about?) the man himself was an introvert who left no record of a complicated inner life. I will have to say though that I learnt a lot about newspapers and other media in the US in the early 20th century and, remarkably because I never even considered for a moment that there would be even the slightest interesting element to boxing, I learnt some stuff about the extraordinary role boxing played in US race relations in the 19-teens and twenties.
Posted by David Nichols at 1:38 AM