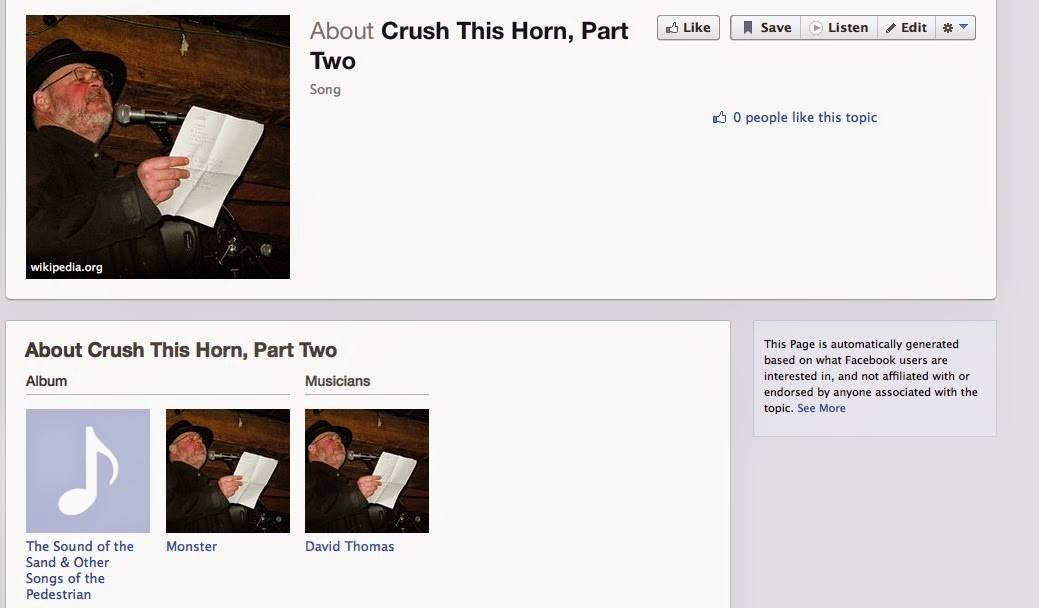 Go searching for ‘Crush this Horn’ on the internet and see what you dig up. Mainly, it’ll be references to the two ‘Crush this horn’ songs, in various incarnations that have presumably resulted from either fans typing in track listings, automatic download sites, or replicated versions thereof. Then you find things like ‘NATO navy patrols African Horn, seeks new ways to crush…’ or ‘Black Horn of Heaven or Mind Crush.’ The internet has shown us a whole new world of mad juxtaposition, now no longer emanating from esoteric individuals so much as the complete range of possibilities in the world. As you see above, there is even a ‘Crush This Horn, Part 2’ facebook fan page, generated by nobody, and ‘liked’ by nobody, too. Perhaps I was the first to see it?

David Thomas was/is not Pere Ubu, any more than Mick Jagger is the Rolling Stones (and there, pretty much, the similarity ends). But this apparently did not preclude Thomas from carrying ideas on between one and the other. ‘Crush This Horn’ was the last track on Pere Ubu’s The Art of Walking. Like a few Pere Ubu tracks from this early 1980s period (I’m thinking, for instance, of ‘The Book is On The Table’, which is a b-side for which the ‘vocal’ is the female voice on a French language instruction recording) David Thomas is not obviously present on the track, which is essentially a layered piece of music concrete made from distorted music – seemingly (and almost certainly actually) created from tapes of instrumental music on slightly out-of-tune radios, or perhaps a blend of such recordings and in-studio music snippets (I always assumed this was totally ‘found sound’, until I considered the copyright implications of this approach).

Here Thomas presents us with ‘Crush This Horn, Part Two’. ‘Part Two’ is not a sound collage but an actual song, recorded by the Golden Palominos no less, with music by Anton Fier. As with so much of The Sound of the Sand it is not easy to know exactly what’s going on, but one assumes that (a) Thomas thought ‘Crush this Horn’ was a good title; (b) he wanted, on some level, to lay claim to a Pere Ubu continuity, and to introduce lyrical and titular connections between the old oeuvre and his new one was a good way to do this; and (c) something about the music Anton Fier brought to him with this recording made him think of horns, though this is one of the few songs on the album which does not actually involve a brass instrument.

It has to be said Thomas doesn’t have too much time for this particular horn. It is seemingly self-centred and irritating: when he blows it, it goes ‘Me Me Me’ (later, just as annoying, it goes 'I yi yi'; it's got an ego). He tells us many times across manic piano bashing (from John Greaves) that he ‘assumed I’d crushed that horn’.

One of the things one tends to notice in David Thomas/ Pere Ubu lyrics is there is almost absolutely no sex in any of his works – at least, I can’t think of any (unless you count the absence of sex as sex, eg ‘The Modern Dance’, ‘Final Solution’ etc – and even here I’m absolutely extrapolating). Even so, on some level, whether he initially considered it or not, there is an interpretable sexual motif within this song: it is a self-centred, yet vulnerable, ‘horn’. I feel awkward bringing it up, but it can hardly be denied.

However, I would prefer to imagine that this is rather less about arousal and more about music itself; the irritating melody, the catchy tune, the ‘ear worm’, if you will. ‘Crush This Horn’ (I only have the early CD version of Art of Walking these days so I don’t actually know if this was later changed to ‘Crush This Horn Part One’ – the title it generally has these days online) was bits of half-remembered, ambient noise in which, perhaps, the listener is placed as ‘far away’ because the sound source – some hot jazz club in a big city thousands of miles from your location – is so distorted and drifting off-signal. ‘Crush This Horn, Part Two’ is another take on a listener’s response to a pushy, domineering music. In this case it is some kind of creepy-crawly (‘crawled out from under a rock you see’) yet it is both overbearing and easily destroyed – if only Thomas, the narrator, could wake from his dream long enough to kill it (‘I assumed I’d crushed that horn’).

This track, and the two that precede it on side two of Sound of the Sand have a uniting similarity, a device which, once noticed, makes the listener wonder why on earth the three songs were sequenced in a row (by accident? As a joke?). That is, that each track essentially ‘breaks down’ at a certain point. ‘Big Dreams’ actually stops at 0:25 and 0:50 (Thomas even says ‘stop’) and the second stop is long. ‘Happy to See You’ stops at 1:28 for some bass notes, dripping water sounds and while it builds back to a vestige of its former self, it never really ‘recovers’ by dint of Thomas’ off-mike riffing, suggesting a mega-fade out. ‘Crush This Horn, Part 2’ stops at 0:25 (the same point ‘Big Dreams’ halts) for a bit of Allen Ravenstine spookiness (I don’t know much about how Ravenstine did his thing on recordings, but I’m guessing three overdubs with three different settings, all of them somewhat experimental and unrepeatable).

Beyond this there is little to say about this oblique song. Essentially tuneless, with the rhythm – and, occasionally, the hum – of a sewing machine, it is a song about irritation and while annoying, it’s over so fast it barely has time to register. What is perhaps most interesting about it musically is that Thomas very soon after this album released a number of subdued, melodic releases which bear little resemblance to such harrowing, semi-industrial cacophony.
Posted by David Nichols at 4:00 AM