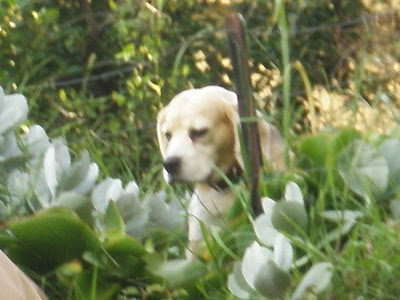 Charlie watching Barry and Kenzie playfight from the cheap seats last weekend.
I see potential for a new tv show combining elements of anthropomorphised documentary (Meerkat Manor etc) and sitcom (I'm thinking particularly of The Office). Because when I see how Charlie has changed with the arrival of Barry, it strikes me (again) that hierarchies are everything in dog world. Charlie as Millie's underling was a challenging, edgy and sometimes reckless personality. Now, with Barry taking that role, Charlie is some kind of elder statesperson, leading a life of routine and quiet duty. She has become a kind of public servant. I am reminded of an insane diatribe I once had delivered to me (though not about me) by a fellow Australia Post worker in about 1987, about those amongst us who went up in the chain and became bosses, betraying us in the process. You used to be cool Charlie.
(No, you still are. It's different though. It's Martin Scorcese cool, not John Safran cool.)
Posted by David Nichols at 6:10 PM

The Rolf Harris show about penguins shat me. It's not called Penguin Island you fool! It's Phillip Island!