today was a write off

When you live 18, 415 days as I presently have (since birth), I guess you have to have days that are write-offs and you have to be philofreakin'sophical about them. This morning I set off to take Barry and Ferdie to the Beagle Club of Victoria walk at Gardiner's Creek. We went on Citylink - so, through the tunnel under the Yarra, etc - three mins after getting off the freeway at Warrigal Road, and five minutes before getting to our destination (we were making excellent time, we had twenty minutes to spare) the gauge on the radiator went literally through the roof. I pulled over and waited, then started driving and bingo a minute later it happened again. I pulled into a side street and called RACV. The guy came quite quickly (about 20 mins, after a warning that he might take up to 90). He was great! He quickly deduced it was the water pump, which had packed it in. 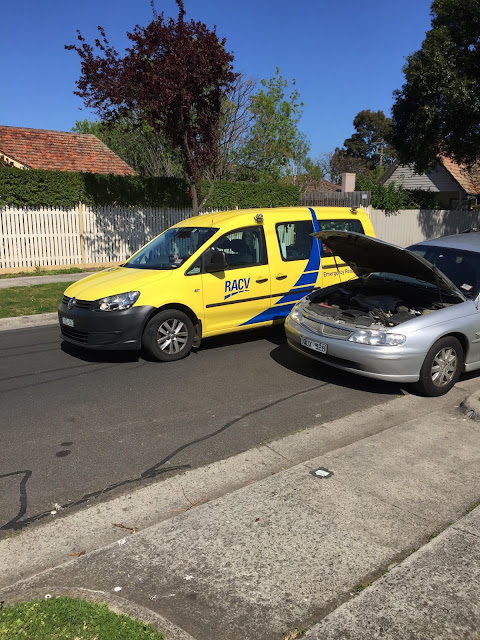 Look I am a glass half full person everyone knows it and it accounts for my cheery disposition. I have to be glad (1) the pump didn't pack it in in the tunnel, for instance, or on any part of the freeway. I also have to be glad that (2) when it did pack it in, the head gasket, whatever that is, didn't explode or whatever they do. Etc. 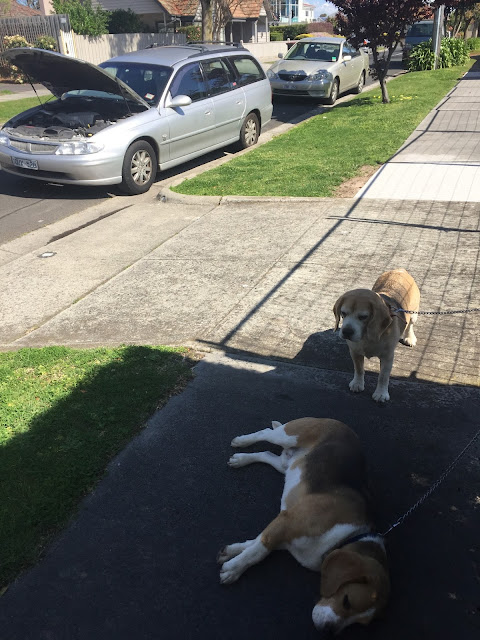 Anyway basically we had to get the car towed and the picture above is Barry being alpha dog and Ferdie just giving up on ever having fun again, but at least lying down in the shade. Having these two was another issue, because without a car I'd have to get them back to Broady somehow. It was 20 mins walk to Homesglen Station which I was actually willing to do but the RACV man said that I was entitled to a pet taxi (did you know there was such a thing?) and so I said OK, because I like being entitled, and now I suppose that Tony Abbott and Joe Hockey are no longer in power, the age of entitlement is back back back. However, I didn't want to get the pet taxi until the tow truck came, and when the tow truck came (took an hour) that guy said he didn't mind the dogs travelling in the tow truck, so... 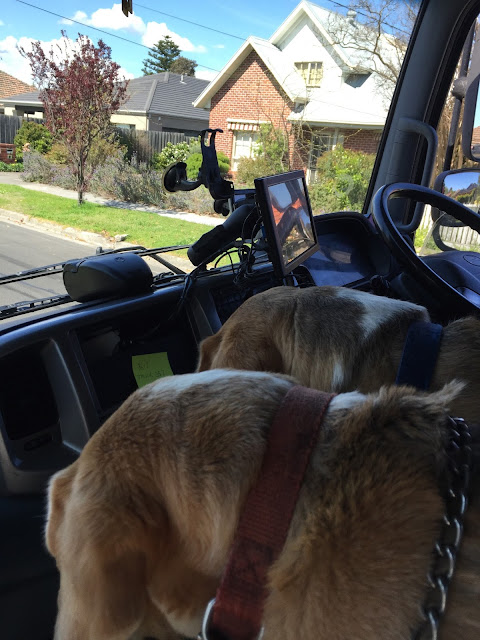 that is what happened. They were not exactly thrilled about being in another vehicle, but they managed, except Barry drooled a lot. I didn't want to get drool on the tow truck driver's seats so, me and Barry being pretty close, I took the responsibility to capture his drool in my hand and rub it on his head.
I did that.
I'm going to cut a long story short because that wasn't really even half of what happened. But it's all I have pictures of. And I'm not avoiding telling you anything interesting, it was just a really drawn out process. I did enjoy spending time with Ferdie and Barry though and they were, all things considered, pretty well behaved. It's such a shame we missed the BCOV walk though. I had grand plans to video it etc. But in truth, getting out my half-full glass again, if the water pump was going to pack it in, I'm glad it did it before we got to the walk, rather than after, I'd probably still be waiting there now (at 9:20). Phew. 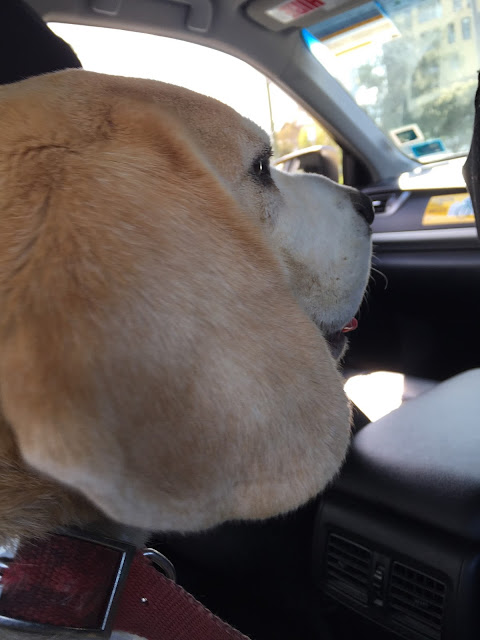 Posted by David Nichols at 9:22 PM

I'm so glad you did that with Barry's drool, having just got back into the house after locking myself out in my pyjamas 2.5 hours ago, this post makes me feel a whole lot better not to mention more entitled.