So, not much else going on for me this evening so I decided I would take myself to the cinema to see something that was not at all demanding. Actually, that didn't quite work out because Bad Moms is kind of a tricky one to work with. I did occasionally laugh, and that I think is due to the excellence of the three female leads who play the trio of 'bad moms'. Particularly Kristen Bell and that takes doing because in a sense her character really was the weakest. Doubly - she plays an actual weak person but also not a terribly well developed character. But then again, there are tons of elements in the movie that a less gung-ho director would have been finicky about; for instance, Christina Applegate's character, who's an appalling bully with a huge amount of money for whom power is everything and who runs the PTA at Whatevery Heights High with an iron fist, should surely have children at the school. But we never see them. Even in the 'run along and play' kind of sense. I am not even sure they are mentioned. Ditto Kathryn Hahn's ex-husband. He may have been mentioned - perhaps even by name, but I don't think so - but he is certainly not seen. Early in the film the dog gets sick, with vertigo which apparently means he is going to have diarrhoea for two days. Does he? Probably, but we never see it, which is fine, I mean, that's good, but it is also never mentioned again: there's no 'I'm glad the dog's better now' (we do see him later on, once I think, and he is fine).

It doesn't really matter because it's all trope, trope, trope. It kind of powers through on the strength of its own preposterosity, which I have to say I admire in lots of ways. Mila Kunis should probably be doing better movies (maybe she is - I don't know), Kristen Bell definitely should be doing everything (though damn it, I never saw the Veronica Mars film - I suppose I should have) and Kathryn Hahn is larger than life here and does pretty well with an inexplicable character who talks about dicks all the time.

Truth is I'm more interested in talking about the experience of seeing a movie in a Finnish cinema. So I went in (I won't bore with the details of how weird the crazy behaviour of the ticket machine was - lucky I got there early enough to sort that out though). They showed advertising slides on a loop, I remember one was for Fanta the other ones I couldn't really fathom. There was quiet noise of talking and music behind them, which I wasn't sure about - whether it was meant to be deliberate, or whether it was bleeding through from another theatre or what. Then we had a bunch of ads for things like paint, insurance I think, Ikea (which the Finns pronounce 'ickier'), I can't remember what else. A man two seats away from me who was there with a woman i.e. on a date I suppose, started exploring his practice of loudly snorting and drinking his snot, which was a little distracting and it made me reflect one more time on entitlement - something I've been musing on a lot this year - in Australia I would feel much more irate about this disgusting practice. For some reason in another country I feel sufficiently distanced from it to not be completely repelled (though I was pretty fuckin' repelled).

So the film itself - it was subtitled in both Finnish and Swedish. There were quite a few times when the subtitles were more indicative than comprehensive, and I guess except for rare instances, everything had to fit on one line because there would always be two lines of text on the screen. Quite an achievement for the translators, really. These aren't great examples but I never knew when really good examples would come up, of course: 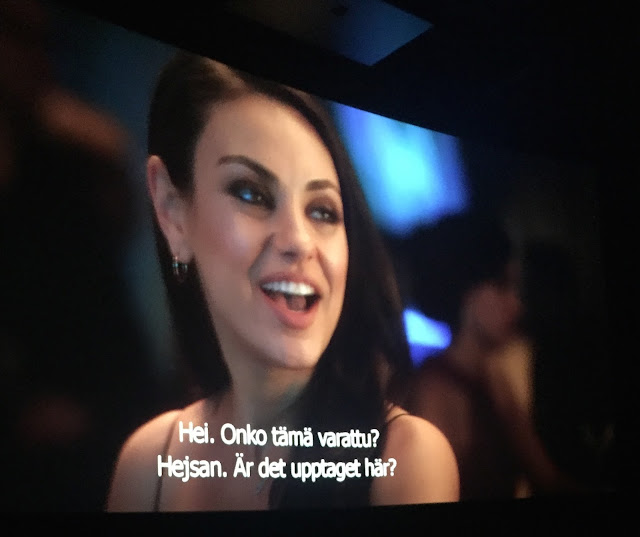 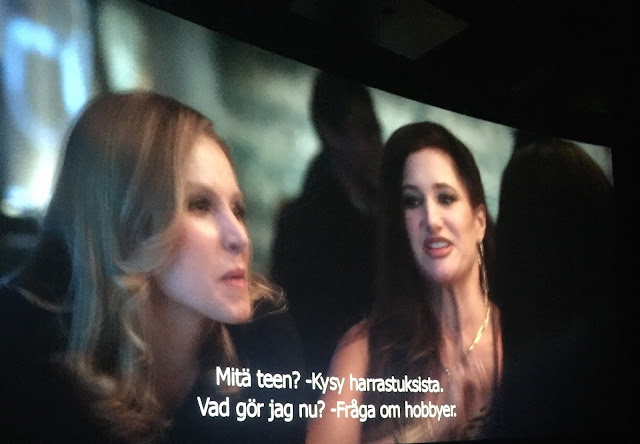 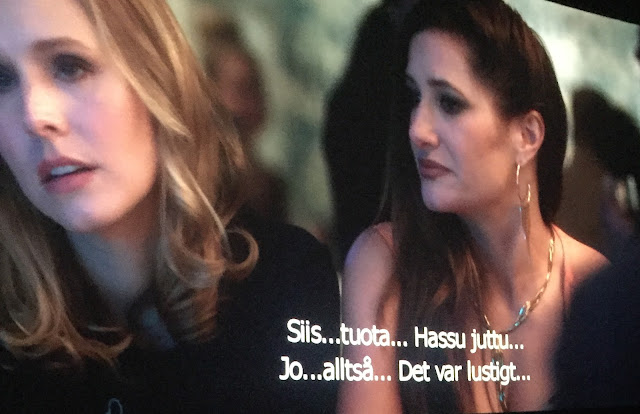 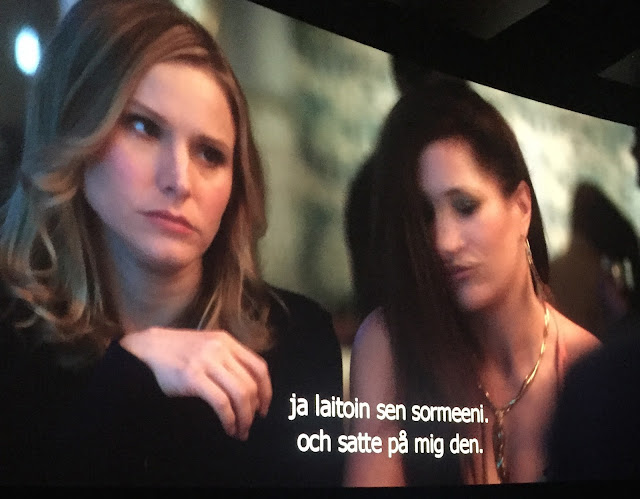 These are all from an early sequence when Mila Kunis is trying to 'get laid' as they say and she is demonstrating how clueless and boring she is, at a club where apparently men are only interested in talking to interesting women, which maybe I don't get out much anymore, but I'm really not sure that's the main thing at clubs. BUT WHATEVER...

OK so the film has some interesting stuff going on. One thing is the ambivalence it has towards motherhood, or at least, it tries to tick too many boxes, of the girls goin' wild but then getting all teary about how much they love their horrible children. There is one scene where they're in a restaurant bagging their kids who are sitting at another table, then they start to get choked up about how much they love their children. Given the way the rest of the film's been going, you kind of expect some kind of punchline, to deflate the emotion. But no: emotion stays. There's more of that towards the end too.

I know you're never, ever going to see this film but I figure I don't want to tell you the very end here but it's also really freakin' weird, and if you saw it you'd know what I mean - let's just say, after all that, because she's got money it's OK?! Or what is it supposed to mean?

It has a really good exchange between Mila Kunis' character and her son about entitlement which I wish I had written down.

OK. Done. On the way back to my digs I saw these things: 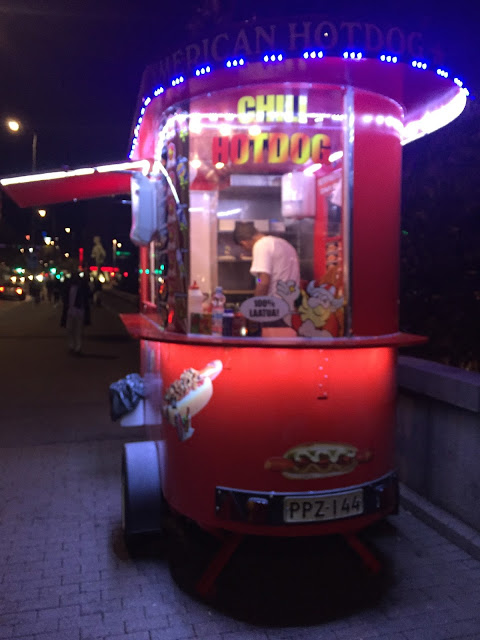 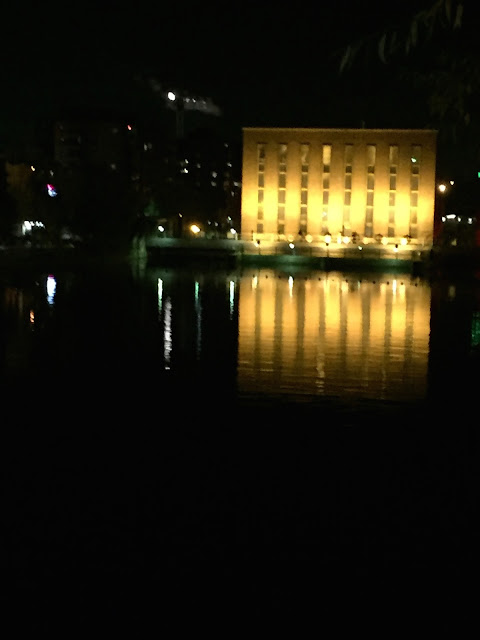 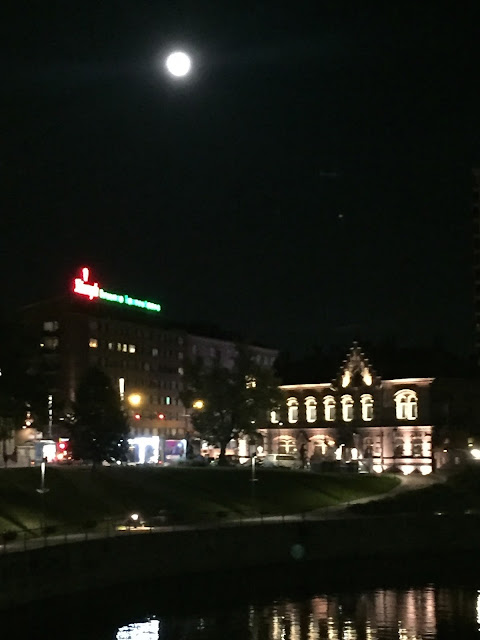 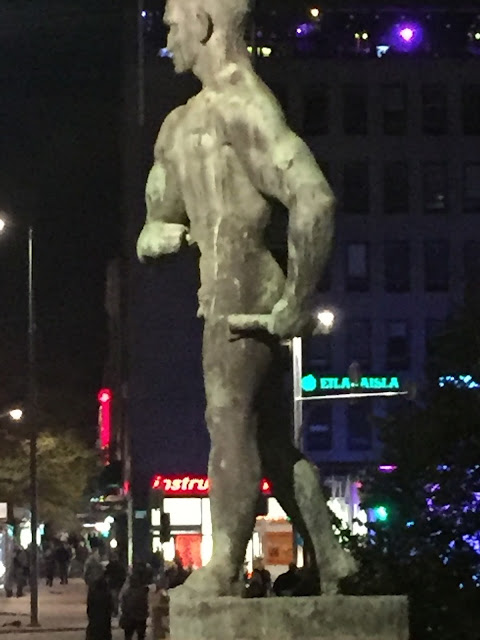 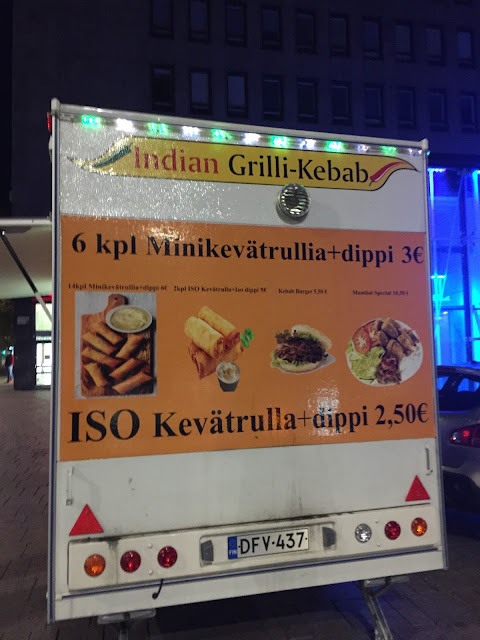 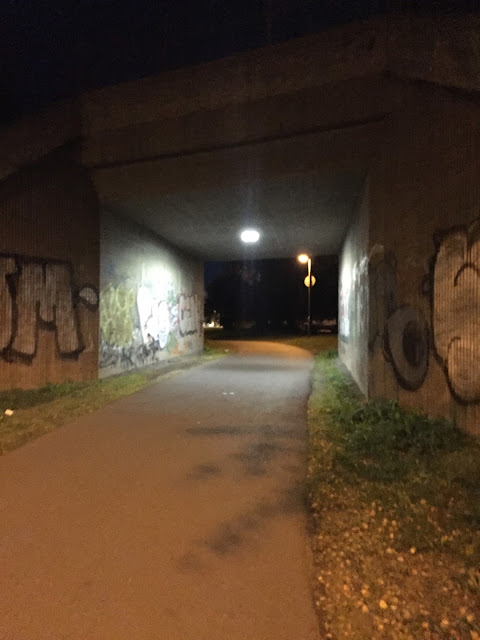 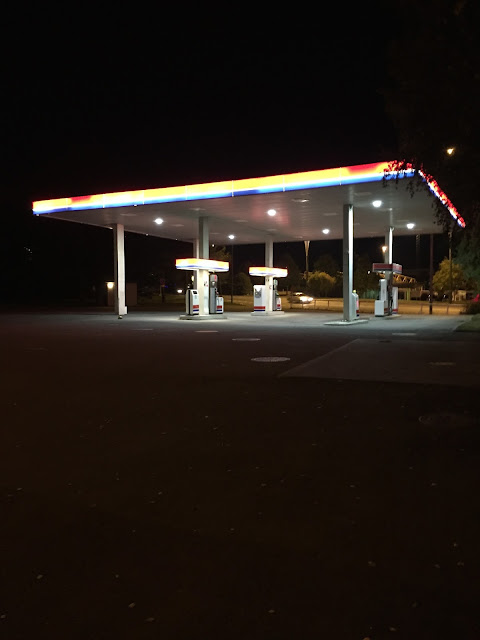 Goodnight!
Posted by David Nichols at 6:54 AM